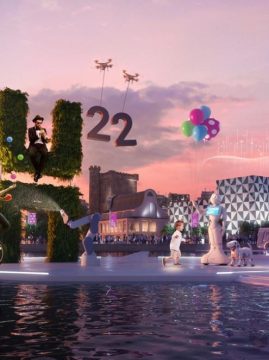 H22 City Expo 30 May – 3 July 2022 HELSINGBORG – SWEDEN
April 30, 2022
Each of us has a part to play in creating happy, healthy cities in balance with nature. For 35 days, Helsingborg invites the world to explore new twists on a sustainable city that celebrates all life. Discover how innovation and collaboration can inspire everyday solutions to the world’s biggest challenges. Unleash your inner changemaker and connect with people from across the world. Let the energy, surprise, and different flavours of the city empower you. For city changers and leaders H22 City Expo is an arena for the world’s visionary leaders, urban disruptors, and crazy dreamers to explore local solutions to the global challenges that will define our future – and where cities must lead the charge. Connect with a community of peers and turn words into actions that shape sustainable cities. Inspire and be inspired through talks, conferences, site visits, and hackathons. Explore the city as a living lab and experience the biggest arena in Europe for sustainable urban transformation in 2022. For innovators everywhere Get a closer look at the latest tech, the future homes, and the newest takes on a sustainable city – for the people, and by the people. Engage with hundreds of innovative ideas and solutions on show, and put your own flavour in the development mix. You’ll be a living component in an urban lab that brings together industry leaders, public sector pioneers, and passionate residents to develop, share, and test real-life solutions in real time. Make H22 City Expo your platform and spark new connections for the future. Read more
More 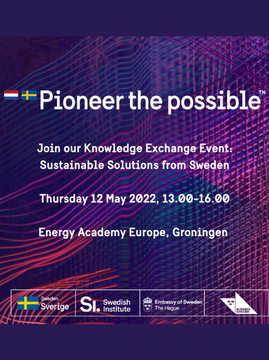 JOIN SWEDEN TO “PIONEER THE POSSIBLE”!
April 29, 2022
The Swedish Chamber is very pleased to share the invitation to the event Pioneer the Possible: Becoming the World’s First Fossil Free Welfare State by the Embassy of Sweden in the Netherlands on May 12, 13.00-16.00, at Energy Academy Europe in Groningen. In this Knowledge Exchange Event, you will meet representatives from Swedish companies and the Swedish experts on the road to a fossil free state in 2045, discussing together with New Energy Coalition and the City and Province of Groningen. There is an exhibition showcasing the latest green innovations and smart technologies to speed up the transition. The event is a platform for joint action – let’s take the next steps together! For more information and to sign up, click .
More 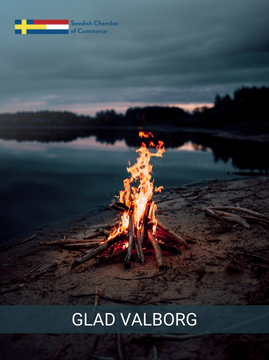 HAPPY WALPURGIS EVE – GLAD VALBORG!
April 29, 2022
On April 30, the Swedish Chamber office will be closed due to Valborg.   The last day of April, Sweden celebrates Valborg (Walpurgis), the arrival of spring by gathering around large community bonfires, often accompanied by choral singing. This day also happens to be the birthday of the Swedish king!   The forms of Walpurgis celebration vary in different parts of the country and between different cities but is especially big in Uppsala and Lund — the two major university cities in Sweden. There, Valborg often starts with a champagne breakfast with strawberries followed by parties in the big parks.   Glad Valborg – Happy Walpurgis Eve!   For information about the Swedish Chamber of Commerce and upcoming events welcome to visit our website:   For urgent matters please send an email to info@swedishchamber.nl
More 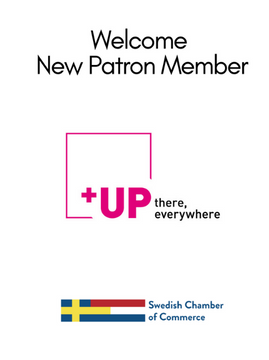 WELCOME NEW PATRON MEMBER – UP THERE, EVERYWHERE
April 29, 2022
The Swedish Chamber of Commerce is very pleased to present and give a warm welcome to our very long-term member that officially has become a new patron member. UP There, Everywhere is the world´s first full-service, global, cloud-based agency. They deliver fully integrated brand, marketing, and digital services to help transform brands and businesses in the global digital world. The Swedish Chamber of Commerce is looking forward to welcoming UP to the Patron family and to a fruitful and exciting collaboration. for more information.
More Ingka Investments makes EUR 340 million investment in nine solar PV park projects in Europe as part of its commitment towards a renewable energy future
April 29, 2022
Ingka Investments, the investment arm of Swe-Cham Patron Member Ingka Group, acquires nine solar PV park projects in Germany and Spain from solar PV developer, ENERPARC. The total investment in the solar PV development portfolio will amount to approximately EUR 340 million.
The expected energy capacity of the solar PV parks equals 300 megawatts in Germany across four solar PV development projects and 140 megawatts in Spain across five solar PV development projects. The expected production of the solar PV parks in Germany and Spain is equivalent to the electricity consumption of roughly 140,000 European households and will generate the equivalent of electricity consumption in all IKEA stores and warehouses in the two countries. “We are delighted to be announcing this important initiative to enable renewable electricity consumption in Germany and Spain, which is another step in accelerating our energy production in Europe and North America. With our own solar parks and wind farms, we want to make renewable energy available throughout the IKEA value chain and beyond” says Krister Mattsson, Managing Director, Ingka Investments. The projects are at early stages and are expected to become ready for construction at the end of 2022, continuing into 2023. The construction itself will take roughly six months. As part of a EUR 6.5 billion initiative to support of 100% renewable energy consumption across the value chain and beyond, Ingka Investments has invested and committed more than EUR 2.7 billion into renewable energy projects in wind and solar power. The development of the solar PV parks in Germany and Spain are part of IKEA’s commitment of becoming climate positive* by 2030 by reducing more GHG emissions than the IKEA value chain emits, while also simultaneously growing the IKEA business. As the biggest retailer in the IKEA franchisee system, Ingka Group’s contribution is key to the successful accomplishment of the 2030 goals. “This partnership is in line with our dedicated strategy to develop a total of 10 GW solar PV plants for our own portfolio and third-party portfolios until 2030. It is a wonderful signal that Ingka Group and ENERPARC have joined forces to contribute to a world of carbon-neutral energy generation.” says Christoph Koeppen, CEO and chairman of the board at ENERPARC AG. Today, Ingka Group owns and manages 547 wind turbines in 14 countries, 10 solar parks and 935,000 solar panels on the roofs of IKEA stores and warehouses. Together, this produces more than 4 TWh, equivalent to the annual electricity consumption of over 1 million European households. Read more about Ingka Group’s sustainability performance and commitments in the new . *IKEA climate positive means to reduce more greenhouse gas (GHG) emissions than the IKEA value chain emits by 2030, while growing the IKEA business. IKEA is committed to the Paris Agreement and to contribute to limiting the global temperature rise to 1.5°C above pre-industrial levels. This includes a commitment to halve the absolute net GHG emissions from the total IKEA value chain by 2030. We will achieve this by drastically reducing GHG emissions through science-based targets and by removing carbon from the atmosphere through natural processes and storing it in land, plants and products through better forest and agriculture management within the IKEA value chain. We will contribute to further greenhouse emission reductions in society by going beyond IKEA, such as enabling customers to generate renewable energy at home. .
More 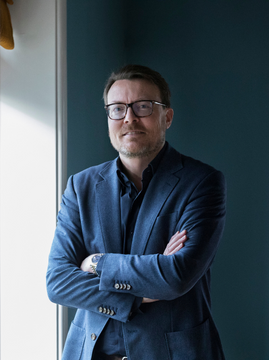 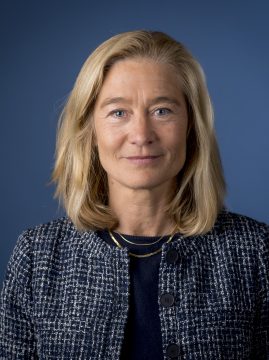 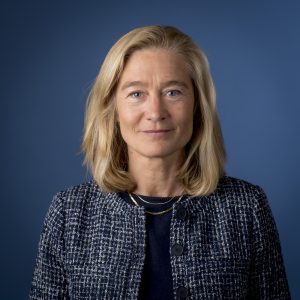 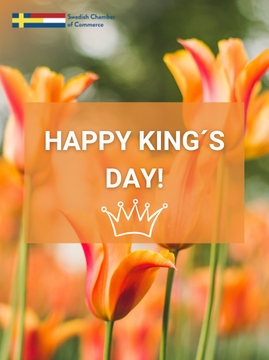