Ingvar Kamprad turned vision into mission and innovation into reality when he founded IKEA, now among the world’s largest brands. The Swedish Chamber of Commerce for the Netherlands is very pleased to announce that Mr. Ingvar Kamprad receives the Swedish Chamber of Commerce 50th Anniversary Lifetime Achievement Award in recognition of his efforts “to create a better everyday life for the many people” for his humane approach of doing business, for his untiring search for new, better and environmental friendly solutions and for serving as a role model for entrepreneurs and workers all over the world. He created an amazing corporation based on an even more impressive business concept, and he still lives it.

“Ingvar Kamprad, born March 30, 1926 is an entrepreneur from the Småland province in southern Sweden, who had an innovative idea. In Småland, although the soil is thin and poor, the people have a reputation for working hard, living carefully and making the most out of limited resources. So when Ingvar Kamprad started his furniture business in the late 1940s, he applied the lessons he learned in Småland to the home furnishings market and IKEA. His innovative idea was to offer home furnishing products of good function and design at prices much lower than competitors by using simple cost-cutting solutions that did not affect the quality of products. Ingvar used every opportunity to reduce costs, and he scraped and saved in every way possible – except on ideas and quality.”

Kamprad’s vision has been the driving force behind the success. The self-service store design and ease of assembly of their furniture are not merely cost controls, but an opportunity for self-sufficiency. IKEA Brand name has now become known worldwide for its innovative and stylish designs. Almost all IKEA products are designed for flat packaging, which reduces shipping costs, minimizes transport damage, increases store inventory capacity, and makes it easier for customers to take the furniture home themselves, rather than needing delivery. But above all, the components put together make a different for the environment.

The Swedish Chamber of Commerce for the Netherlands is proud to honor Mr. Ingvar Kamprad, one of the worlds leading entrepreneurs. With great respect we honour him for what he has achieved in a life time. It is outstanding to reach as far as Mr. Ingvar Kamprad has done in a lifetime and even more remarkable to stay committed to the lifestyle and principles that enable the company to stay its course, sixty years after it was founded on a farm in the Smaland region of Sweden.”

We honour him for his humane approach to doing business, for his untiring search for new and better solutions, and for serving as a role model for aspiring entrepreneurs and workers all over the world.”

The Swedish Chamber of Commerce 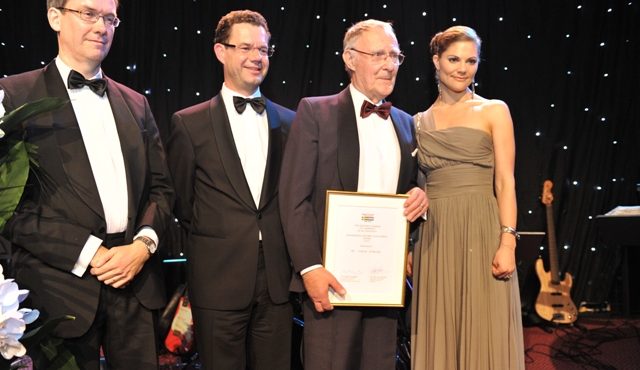