Home > News > News > Tax Plan 2023: a better balance between tax on labour and tax on wealth

Tax Plan 2023: a better balance between tax on labour and tax on wealth

Home > News > News > Tax Plan 2023: a better balance between tax on labour and tax on wealth
Back to overview

The fourth Rutte government presented the 2023 Tax Plan package to the House of Representatives today. It includes many of the measures – totalling over €17 billion – being taken to support purchasing power. This support is important in view of the steep rise in prices, especially for energy. At the same time the package will make it pay more to work, by striking a better balance between tax on labour and tax on wealth. For example, the employment tax credit will be increased and the rate of income tax payable in the first tax band will be decreased. Companies will pay more corporation tax on their profits and the self-employed person’s tax deduction will be phased out more quickly.

‘The consequences of the war in Ukraine are immense, and that includes its financial impact,’ explained State Secretary for Tax Affairs and the Tax Administration Marnix van Rij. ‘We are all seeing the rise in prices at the checkout and in our energy bills. Inflation has not been this high in decades. That’s why we’re taking substantial measures to help people on low and middle incomes. We’re also introducing structural measures to improve the tax system. Over the years, the tax burdens on several different kinds of workers – employees, the self-employed and director-major shareholders – have grown further apart. This is due to various changes affecting the three classes of taxable income (boxes 1, 2 and 3). Wealthier taxpayers benefited most from these changes. The tax system wasn’t meant to work like this and the measures in this Tax Plan will rectify the situation. And in the area of climate policy, we are taking important steps towards a greener tax system.’

The government believes that it has a great responsibility to support households and businesses in this difficult period. That is why it has devised a package of purchasing-power and energy-related measures to ease the burden. The government cannot relieve all the pain, but it can help cushion the hardest blows, in part through the tax system. In its budget plans the government has set out an exceptionally large package of purchasing power measures worth €17.2 billion, of which €5 billion will be made available on a structural basis. This package includes measures aimed at supporting vulnerable groups and people on middle incomes, such as an increase in the employment tax credit to a maximum of €500 net per year and a reduction in the income tax rate in the first band. As a result of these measures, it will pay more to work.

A better balance between tax on labour and tax on wealth

Several measures are proposed that will strike a better balance between the tax burden on labour and that on wealth. They include changes to the rate of corporation tax, the accelerated phasing out of the self-employed person’s tax deduction, and the abolition of the customary-pay efficiency margin used to calculate the taxable salary of director-major shareholders. This will yield €5 billion. The aim is to reduce the disparity that has arisen in recent years between the tax burden on employees and that on business owners. In addition, the capital yield tax allowance in box 3 will be raised to €57,000. More tax will have to be paid on larger amounts and the tax rate will be increased annually, up to 34% in 2025. The tax exemption for gifts to finance the buying of a home will be lowered in 2023 and abolished as of 2024. The general rate of transfer tax will be raised from 8% to 10.4% for investors in residential property and for the purchase of commercial property.

Part of the amount generated by these increases in the tax burden will be ploughed back into structural measures that will benefit SMEs. For instance, €600 million will be set aside on a structural basis to reduce employers’ costs and make it more attractive for them to invest. The changes in box 2 in 2024 will help in this regard; there will be a lower invalidity insurance fund (AOF) contribution for small employers, and the energy investment tax credit, the environmental investment tax credit and the work-related costs scheme will be expanded. Moreover, SMEs will ultimately profit from the reduced tax burden on households, as it will increase consumers’ tightly squeezed disposable income.

The Bill on the 2023 Tax Plan goes a long way towards simplifying the tax system. It proposes to abolish the following four schemes: the income-related combination tax credit (IACK), the averaging scheme, the pension reserve scheme (FOR), and the customary-pay scheme for startups. Measures to tackle and put an end to tax avoidance schemes will generate up to €550 million. In addition, before the summer of 2023 the government will present a plan outlining further steps to abolish or simplify tax regulations that have received a negative evaluation.

Climate issues and the energy transition occupy a central place in this government’s policy. Environmental taxes provide an important tool to encourage climate-friendly conduct. Because of the current high level of energy prices, an increase in tax on polluting sources of energy (natural gas) and a reduction in the tax on electricity will take effect in 2024, a year later than planned. The government is thus continuing to take long-term measures to advance sustainability. The Tax Plan also includes other long-term climate-related measures. For example, industrial enterprises will be encouraged to make extra cuts in CO2 emissions through a reduction in their ‘dispensation rights’, which represent emissions that are exempt from the levy on CO2 industrial emissions. In addition to the existing carbon levy, a carbon price floor will be introduced for industry as of 1 January 2023, creating a minimum price to be paid by industrial enterprises for all their emissions. Aviation tax will be raised to €26.43 as of 1 January 2023. It will also be made easier to buy solar panels by lowering the rate of VAT on their purchase to 0%. Finally, the government will be taking additional measures in the area of mobility. From 2025, car and motorcycle tax on light commercial vehicles will be levied on the basis of their CO2 emissions instead of their list price. At the same time, the exemption for businesses will be abolished.

The redress for taxpayers and the transitional legislation relating to box 3 set out in this Tax Plan are based on how the box 3 tax base is actually divided between savings, investments and debts and, as far as possible, on the actual earnings on this income, rather than notional allocations. This means that, from 2021, taxpayers will pay virtually no tax in box 3 on their savings (at the current low rates of interest). The arrangements for redress and the transitional legislation are therefore fairer than the old system.

In recent months the government has examined whether and, if so, how taxpayers who did not lodge objections against their tax assessments for box 3 income could be offered some form of compensation. Ways of directing any compensation primarily towards small savers were explored. However, the government has now decided not to compensate taxpayers who did not lodge objections. Full compensation would cost €4.1 billion, more than half of which would go to taxpayers with box 3 income of over €200,000. The government’s current priority is the socioeconomic security of people who are already struggling to pay their bills. It has therefore opted for a comprehensive package of purchasing power-related measures. 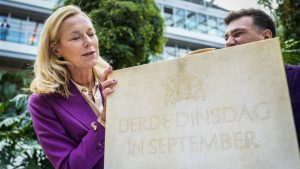 Read more on the Ministry of Finance’s website, https://bit.ly/3S3s2td

The Swedish Chamber of Commerce for the Netherlands welcomes you to a digital presentation of the Dutch Government’s Budget for 2023 & the main tax topics in collaboration with KPMG Meijburg & Co. on September 28, 2022!

During a 45 minutes presentation, Jan Hollemans and Tijs van Ruitenbeek will explain and discuss the budget proposal and highlight the main tax topics.