Vattenfall, NS (the largest passenger rail transport company in the Netherlands) and ProRail have joined forces to open the Nieuwe Hemweg wind farm. Vattenfall has built six wind power turbines on the NS site in the Port of Amsterdam in recent months. These new turbines are replacing twelve old ones from the province of North Holland.

In the last few months, six large wind turbines have been installed on the NS site close to Amsterdam Sloterdijk station on the Nieuwe Hemweg wind farm. The soil on this site is sparse, and a yard had already been planned for ProRail, so it was a challenging area to work on. Despite these challenges, however, NS, ProRail, Vattenfall and the Port of Amsterdam worked intensively together and were able to successfully integrate the six new turbines with the yard. This is the first time Vattenfall has built a wind farm right next to a train yard in the Netherlands, making their collaboration unique. 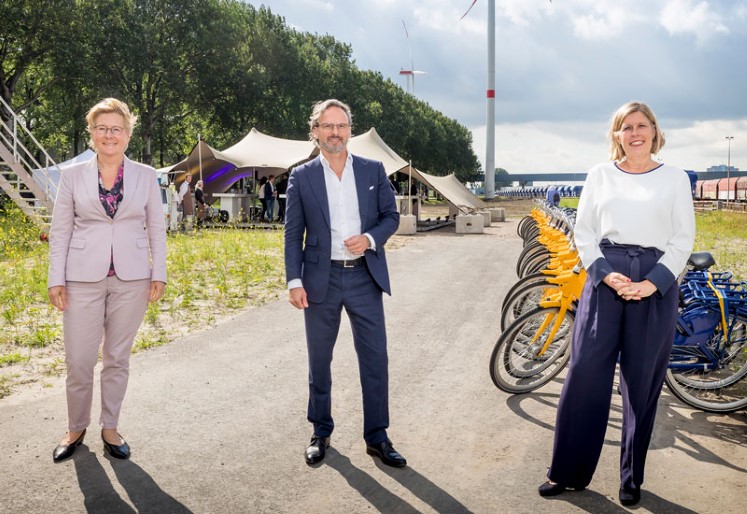 Martijn Hagens, CEO of Vattenfall Nederland, said: “Working in an environment that is used so intensively as Sloterdijk is hugely challenging. The Nieuwe Hemweg wind farm is now on track to be completed on time, which is a joint success for all parties involved. Vattenfall wants to make it possible to live fossil-free within a generation. The Nieuwe Hemweg wind farm takes us one step closer to achieving that ambition.”

Building work began on the turbines last autumn. Mild weather this winter meant they were built in record time, and the turbines were commissioned after extensive testing. Electricity generated by the wind turbines goes to Vattenfall.

Anneke de Vries, NS board member: “We worked hard together with ProRail, Vattenfall and the Port of Amsterdam to ensure this project was a success. In the Netherlands we only have limited space for sustainable energy production, so using our land and buildings is a win-win situation, and we’re continuing to work on complex sites. Collaborating to generate wind and solar power integrates seamlessly with NS’ strategy. We believe in sustainable business models, and our aim is to be completely fossil-free, day and night, by 2040. This means, for instance, we don’t want to have to rely on gas power stations when it’s not windy.”

Ans Rietstra, ProRail board member: “As a railway operator we work hard on sustainability, and not just when it comes to our own projects. Wherever we can contribute to the fight against climate change by helping other parties like Vattenfall and NS, we’ll seize the opportunity. I’m delighted the project was successful. All of us worked tirelessly to bring the project together, and the results are outstanding. I’d like to congratulate Vattenfall and NS. Well done!”

The six wind turbines are replacing twelve old ones. Eight old turbines previously stood on the site where the new wind farm can now be found. Four old wind turbines were also removed from the IJsselmeer near Medemblik. This is in line with North Holland’s policy to have one new wind turbine replace two old ones.

The six new turbines have a joint capacity of 13,2 MW, almost double the 12 wind turbines they replace. The amount of electricity generated with it is equivalent to the consumption of ten thousand households.