Home > Business in the Netherlands

Business in the Netherlands

The Netherlands is best known for its tulips, windmills and clogs. And for its low altitude and vulnerability to flooding. Less well known is that the Netherlands has the tenth largest economy in the world, and ranks sixteenth in GDP. Equally little known is that the Dutch have won Nobel prizes for chemistry, physics, medicine, economics and peace or that the world’s planners and architects flock here to learn about Dutch solutions for this crowded country. 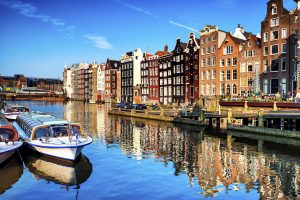 General
Business hours are generally from 08:30 to 17:30. Most schools are closed after 12:00 or 12:30 on Wednesday afternoons therefore many work only half day on Wednesdays.

Weekdays
Most shops are opened every day from around 9 a.m. until 5.30 p.m. On Monday mornings, shops often don’t open until around noon. Most towns and cities have a shopping night when shops are opened until 9 p.m. This is usually on a Thursday. Most banks and post offices are open from Monday to Friday between 9 a.m. and 5 p.m. Only major banks and post offices are open on Saturday. GWK Travelex is open every day of the week. Most GWK Travelex offices are located nearby train and bus stations.

Sundays
Every Dutch city has its own rules for shopping on Sundays. Dates are available at the local tourist information (VVV). In most big cities, supermarkets are open every day until 10 p.m., except on Sunday’s when they close around 5.30 p.m. In other parts of the country, supermarkets are usually opened until 8 p.m. on weekdays and Saturdays, with varying opening times on Sundays.

Summer Holidays
The summer recess of government workers in the Hague ends on the third Tuesday in September. On that day, the so-called Prinsjesdag (Princes’ Day, also called ‘Budget Day’), the ruling monarch holds a ‘Speech from the Throne’ to publicly announce the political guidelines and budget for the coming year. On this day as well, the Royal Family rides through The Hague in a parade in the horse-drawn ‘Golden Coach’.

Christmas and New Years
The feast of St. Nicolas, who is called Sinterklaas in Holland, is celebrated on December 5. In Holland, the Sinterklaas celebration is much more important than Christmas – especially for children – as there is no special ´Holy Night´ or ´Christmas Eve´ observance in Holland. The Dutch celebrate the end of the year with Oudejaarsavond – the last evening of the ´Old Year´, with champagne, noisemakers and lots of fireworks.

Winter Holidays and Easter
In Holland, hunting for Easter eggs on Easter Day is just as strongly anchored in tradition as it is in Germany. Throughout the Easter weekend many cities also traditionally celebrate the first outdoor festivals, including pop music festivals like the one called Paaspop (´EasterPop`) in Haarlem.

The biggest celebration of the year takes place every year on April 27. This is ´King´s Day´ in Holland, and throughout the country festivities take place, with everything and everyone decked out in the colour orange – the colour of the royal family, the ‘House of Orange’. On the evening before King’s Day, a special celebration called ‘King’s Night’ takes place in The Hague – a big festival held in the middle of the city, with free entry for everyone.