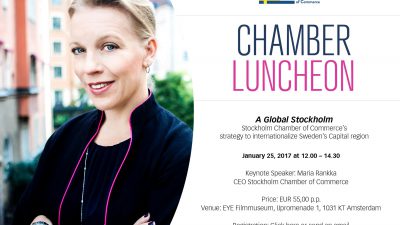 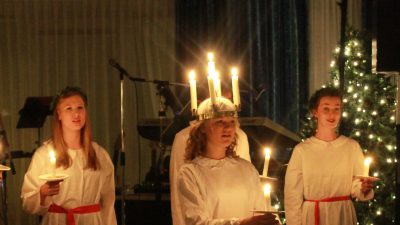 Thank you to all participants, contributing companies, and members for making the Annual Lucia celebration 2016 to a great success. A special thanks to Pia and Anders Rengefors, La Cuisine Scandinave, Hotels van Oranje, Handelsbanken and Inter-IKEA-Systems for their fantastic support. And thank you, lovely LAK from Lund, Sweden, for singing Christmas right into our hearts! We would also like to thank Emila Molin, War Child Sweden and Tjipke Bergsma, War Child Nederland for their presence and for sharing the Lucia tradition with us in the Netherlands! It was a great honor to hand over a check on behalf of the Swedish Chamber for the great work of War Child for children in war zones all over the world. Thank you to all contributing members and friends for making this possible.

With this, the Swedish Chamber wishes all members and friends a Merry Christmas and a Happy New Year and we are looking forward to welcoming you to our exciting events next year! 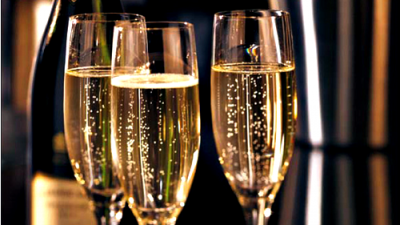 Dear Members and Friends of the Swedish Chamber of Commerce,

The Swedish Chamber of Commerce cordially thanks Ericsson, Inter-IKEA-Systems and NUON for supporting the New Year’s Reception. 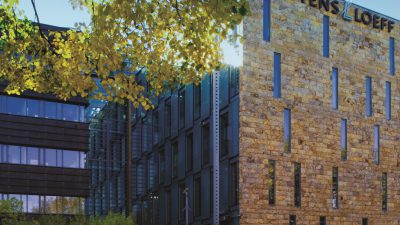 23 March, 2017 Update on Dutch startup environment and impact of international tax developments on your business by Loyens & Loeff

This Seminar has unfortunately been postponed by Loyens & Loeff to a later date this autumn. We apologize for the inconvenience.

Founding or funding a startup in the Netherlands? The Startup Team of Loyens & Loeff will tell you about the practical do’s and don’ts

Are Dutch holding, financing and IP companies still viable for Nordic groups? Loyens & Loeff will update you on the impact of BEPS and EU tax developments on Nordic multinationals with business in the Netherlands

Current developments in the Dutch startup environment
If you are starting up a business in the Netherlands, or if you are investing in a startup, what are the legal and tax challenges and opportunities you should be aware of?
The Loyens & Loeff startup team will give insight in the current developments in the startup environment in the Netherlands, both from the perspective of startups and investors, with a particular focus on the Nordic countries. StartupAmsterdam – the public / private initiative working for and with the startup ecosystem of Amsterdam – will give an introduction

Impact of international tax developments on Nordic multinationals
In a rapidly changing international tax environment, it is key to understand the impact of recent developments on Nordic multinationals with businesses and corporate structures in the Netherlands. We will have a look at how various new measures against Base Erosion and Profit Shifting (BEPS) are affecting these companies. For example, are Dutch holding, group financing and intellectual property companies still viable? And what is the impact of country-by-country reporting and the exchange of tax rulings? 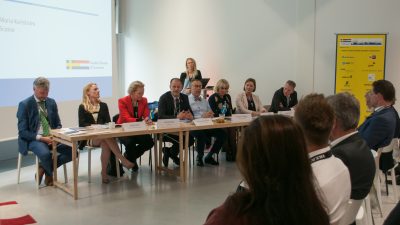 11 May
11 May, 2017 Annual General Meeting and Inter IKEA Systems Presentation 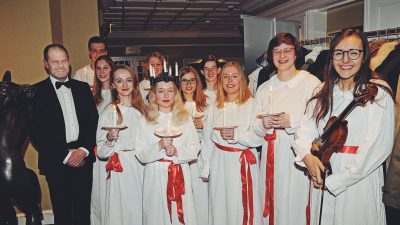 The Swedish Chamber of Commerce would like to thank Master of Ceremony Ruben Brunsveld for his excellent guiding during the evening taking the guests and participants through the snaps songs to the more serious parts as the Swedish Chamer Export Prize Award Ceremony 2017.

Welcome to read more about the winners and the ceremony furhter below on this website. We were very happy to welcome Anne-Lie Persson who preformed with a few of her own songs and a few well-known Cornelius Vreeswijk numbers and later in the evening she and her band Stockholm Tivoli provided grand dance music for everyone who wanted to hit the dance floor.

We would like to thank all sponsors who made this evening to a great success for contributing to the exclusive Goodie Bag to all our guests and to the generous contribution to the Lucia Raffle for the benefit of
War Child. We would also like to thank La Cuisine Scandinave for there excellent Swedish Julbord with everything you can think of from the herring to the meatballs and Swedish Christmas ham!

Over the years the traditional Swedish Chamber Lucia Dinner has become one of our most attended events and is, for many, the highlight of the Swedish Chamber social calendar. Over the years, it has attracted thousands of senior businessmen and women to gather and socialize in a festive spirit. The evening offers, apart from including a traditional Lucia Choir and Swedish ‘julbord’, also first-class entertainment, great company, and fantastic networking opportunities. It was, without a doubt, an event to remember and we hope to welcome all our members back for next year! 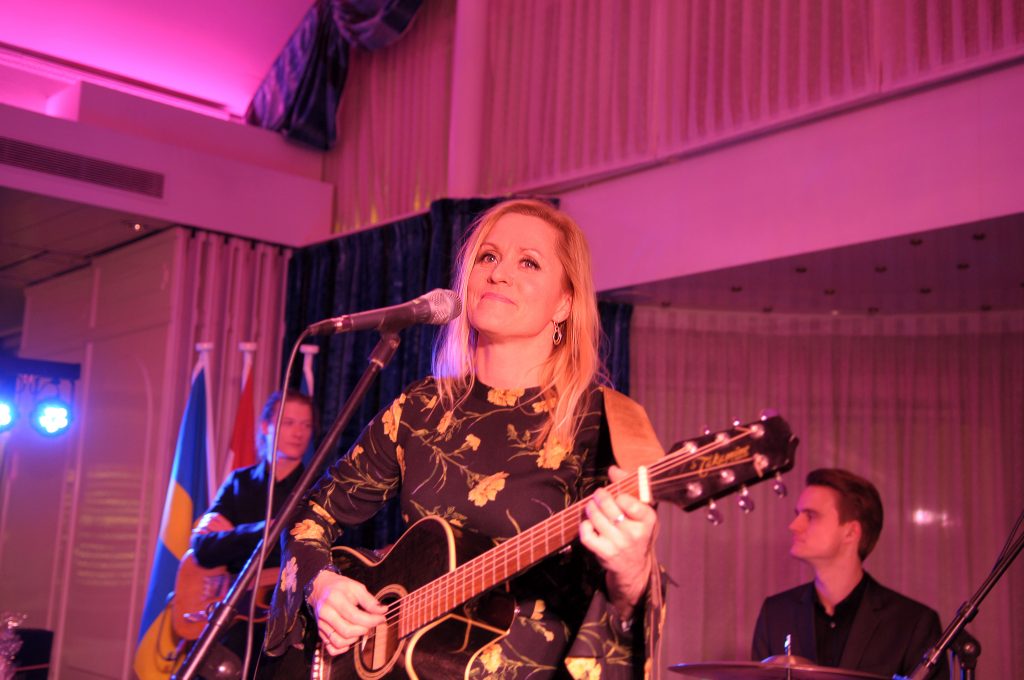 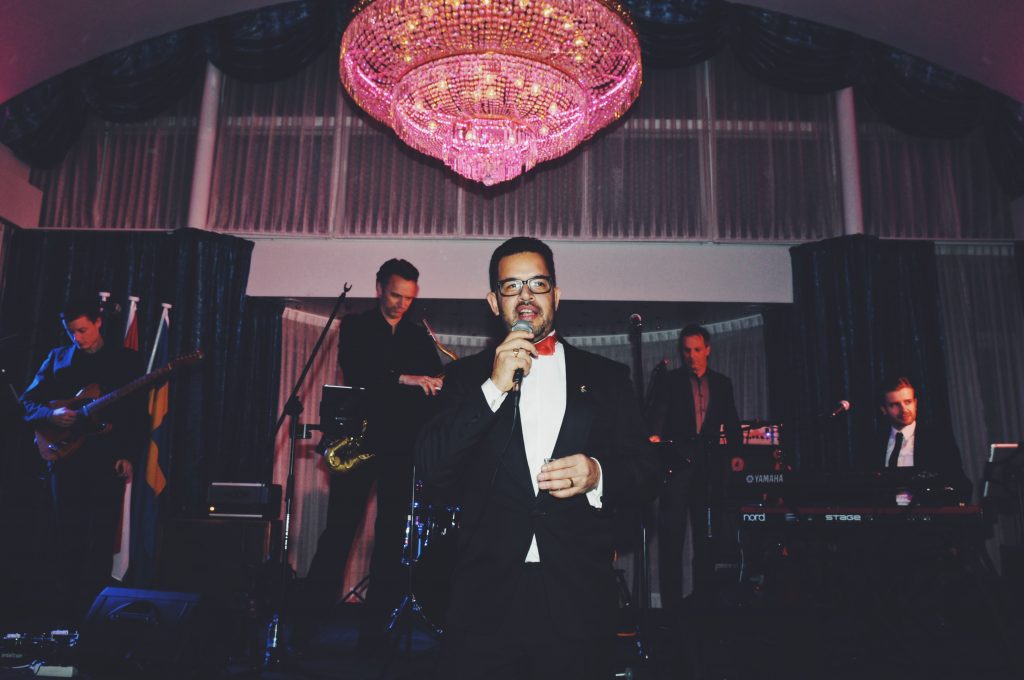 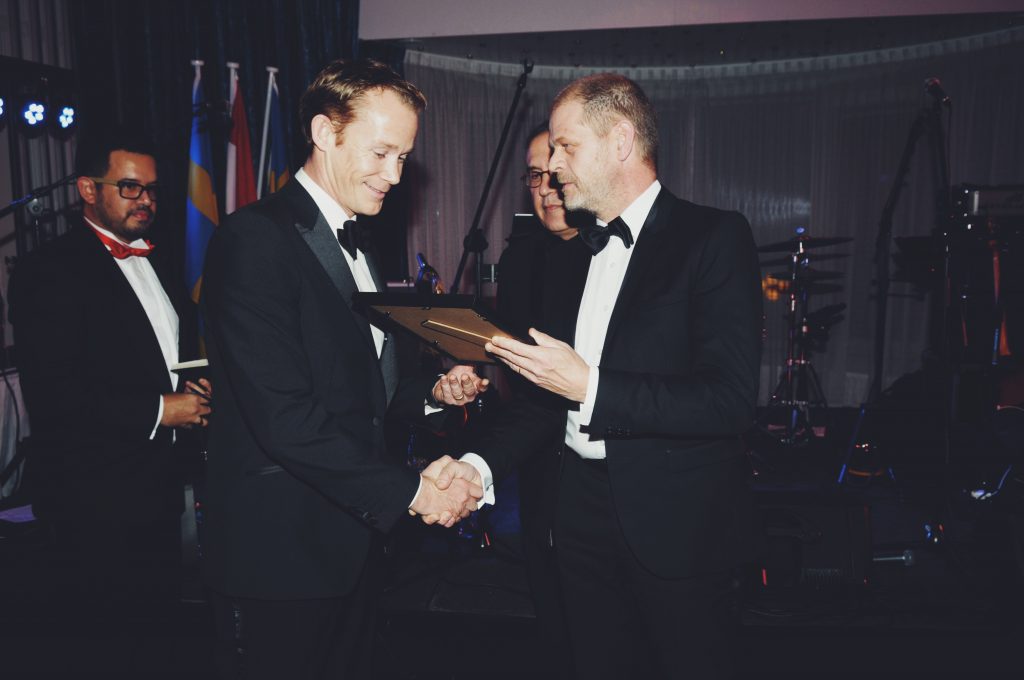 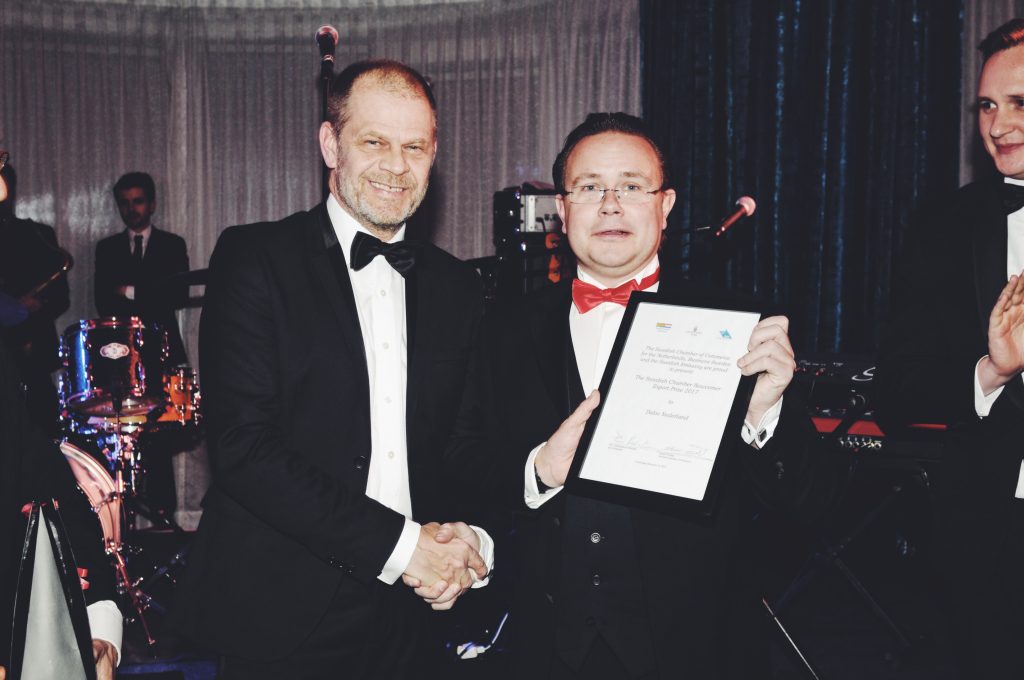 Fredrik Silverstrand, CEO Daloc with the Swedish Chamber Newcomer Export Prize together with H.E.
Ambassador of Sweden Mr. Per Holmström.

Grand Christmas Raffle for the benefit of War Child! 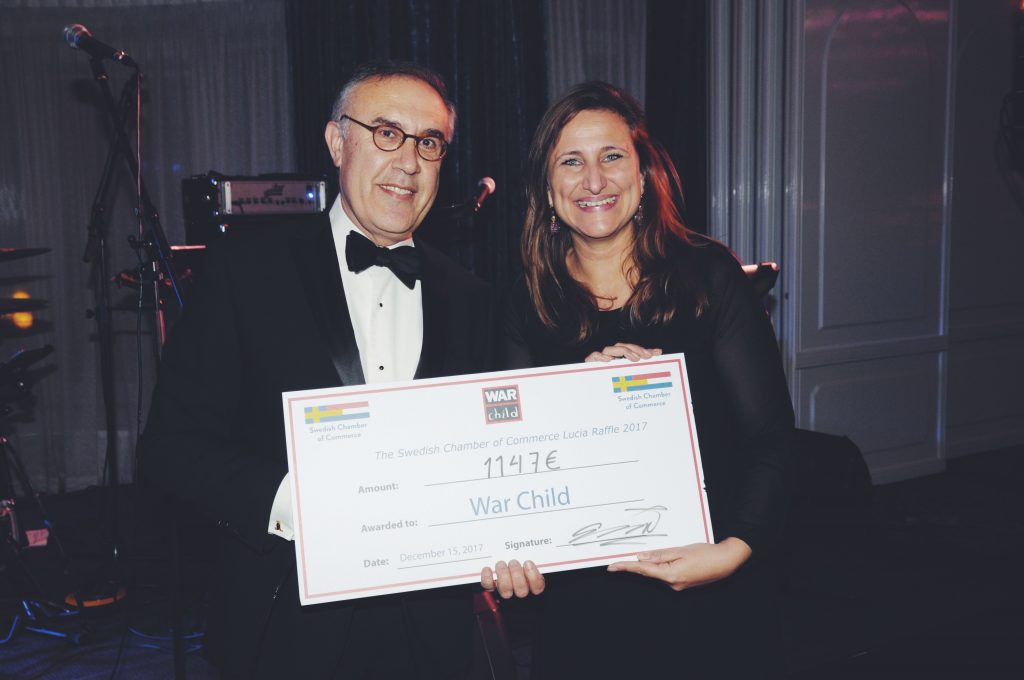 The Swedish Chamber of Commerce Lucia Raffle for the benefit of War Child raised more than 1000 Euros for
their good work with was later anonymously doubled by one of the participating companies!  The Swedish Chamber
would like to thank everyone for the generous contribution to the raffle and for donating the fantastic
Raffle Prizes! 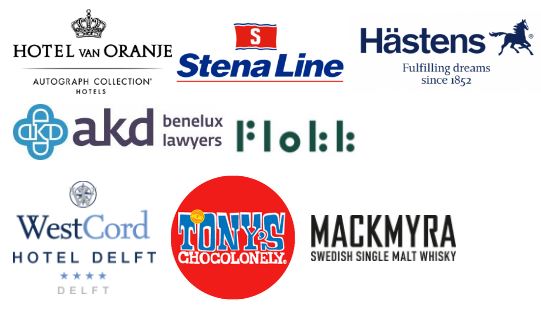 Event photos below by EV Fotografie. 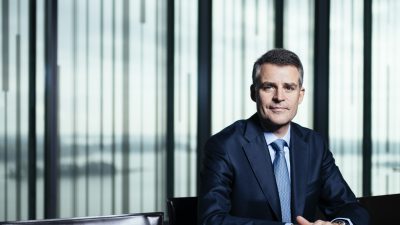 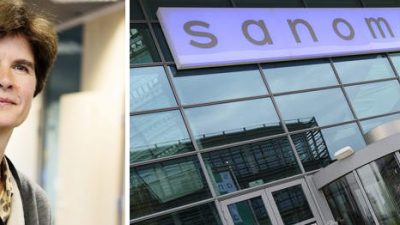 FDCC would warmly like to welcome the members of the Swedish Chamber of Commerce and the Danish Dutch Business Club to our upcoming business luncheon with the CEO of Sanoma, Ms. Susan Duinhoven, as our keynote speaker. Ms. Duinhoven will tell us about the variety of services that a modern media company, Sanoma, has for its customers and the challenges of the media business today. The event will take place on Friday, the 2nd of June at 12-14.30. This luncheon has a great location in restaurant De Kas, in Amsterdam.