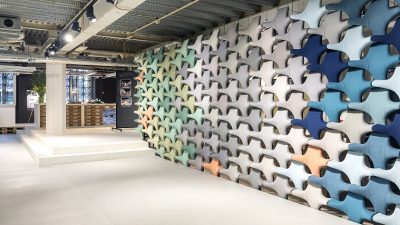 David Coenen, Country Manager Flokk Nederland, welcomed all guests and presented the works of Flokk, the European leading manufacturer of high quality working place furniture and owner of the brands HÅG, RH, RBM, BMA, Malmstolen and Offecct. Julian Wolse, partner of OTH architects and the leading architect in creating the Flokk Design Center, gave a very inspiring presentation about the transformation of the historic building into a vibrant showroom in the architectonic hotspot of Rotterdam. After the presentations, there were room to explore the Flokk Design Center and plenty of time for all members of the different Nordic Chambers and Business Club to network while enjoying delicious snacks and drinks. Thank you to all participants for making this event a great success, and thank you Flokk for the generous hosting and sharing your fantastic concept with us! 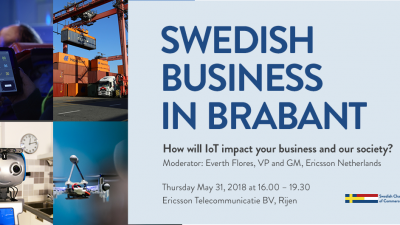 On May 31 the Swedish Chamber of Commerce was very pleased to organize the annual Swedish Business in Brabant event together with BOM Foreign Investments & Trade, Handelsbanken and Ericsson at their visitor’s center in Rijen.

During the very interesting afternoon program, led by Everth Flores, General Manager Ericsson Telecommunicatie, the impact of IoT on society and businesses was visualized through inspiring presentations and cases presented by Ericsson, Cool Industries, Scania and Camilla van den Boom, Sturmm. The Swedish Chamber of Commerce was especially honored to welcome Honorary Member of the Swedish Chamber of Commerce, Clas Ivar Schultz and his wife Gunilla to Ericsson this afternoon. Clas Ivar Schultz has been around since the start of the Chamber back in the sixties of the last century and was for many years active as Chairman. He was also General Manager at Ericsson Telecommunicatie for more than twenty years until the early eighties.

We would like to thank all speakers, sponsors and guests for participating and for making Swedish Business in Brabant to a great success. A big thank to the organizing committee, BOM and Ericsson, for the pleasant collaboration and to Ericsson for excellent hosting.

Welcome to scroll down for event photos by Ericsson.

Presentations by Everth Flores and Etienne Scholl, Ericsson and Nico van der Klugt, Scania are available at the Swedish Chamber of Commerce. Welcome to send an email to events@swedishchamber.nl to receive a copy. 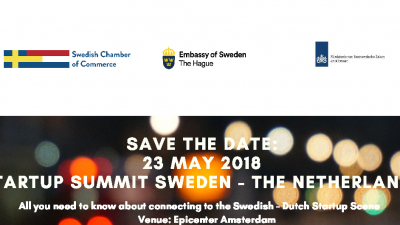 23 May
May 23, Startup Summit Sweden – the Netherlands

What are the key factors behind the thriving startup sectors in Sweden and the Netherlands?

In both Sweden and the Netherlands, the startup sector is booming. According to the Startup Genome ranking the Stockholm and Amsterdam startup ecosystems were both ranked top 20 globally. During the high-level Startup Summit speakers discussed the factors behind the thriving startup sectors in both countries, and how a long-term collaboration can lead to an even better performance of our startup-ecosystems. Prince Daniel of Sweden and Prince Constantijn of the Netherlands honoured the event and made introductory remarks about their view on the importance of startups and what the countries can learn from each other.

The two princes were invited due to their engagement in entrepreneurship and startups. Prince Daniel is committed to enterprise and works to promote entrepreneurship among young people, eg. through the project Prince Daniel’s Fellowship. The idea behind the project is to inspire young people to become entrepreneurs and to support ambitious young entrepreneurs in growing their business. Prince Constantijn is Special Envoy at StartupDelta, the accelerator for the startup ecosystem in the Netherlands, and advises companies and the European Commission on their digital innovation strategies.

The Swedish State Secretary for Enterprise and Innovation, Stina Billinger, and the Dutch State Secretary for Economic Affairs and Climate Policy, Mona Keijzer, discussed how policymaking and financial support can help the startup sector flourish, and what the two countries can learn from each other. The event was the starting point for a long-term collaboration between the two countries within the startup sector.

“For me, it is very important that our startup sector is doing well, because then startups become scale-ups and that’s good for the economic growth. […] The three most important things we can help startups with are access to talent, access to funding and access to connections”, Mona Keijzer, State Secretary for Economic Affairs and Climate Policy, the Netherlands”

“One important factor for startups is gender equality – women cannot stay at home with the children and scale-up a company at the same time”, Stina Billinger, State Secretary for Enterprise and Innovation, Sweden.

The summit was held the day before the opening of conference The Next Web, in the brand-new Amsterdam premises of Epicenter. a digital innovation house and destination for large corporates and fast growing digital scale-ups looking to learn, inspire, collaborate, grow and innovate with impact.

“Startup Summit Sweden – The Netherlands” was organised by the Swedish Chamber of Commerce, The Embassy of Sweden in The Hague and the Dutch Ministry of Economic Affairs and Climate Policy.

Welcome to scroll down to the end of the page for event photos.

How do national governments support scale-up ecosystems? Summing up the findings of a study comparing the United Kingdom, Sweden & the Netherlands

Learning from the study: How can policymaking and financial support help make the startup sector flourish?

From Startup to Unicorn

Presentations by four mature startup companies from Sweden and the Netherlands

On internationalization: Their journey and lessons learned!

Fireside talks about startup culture and women in Fintech 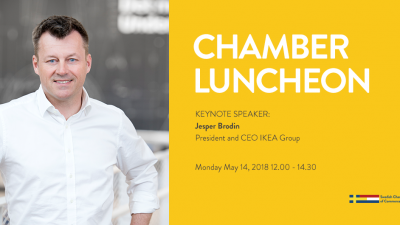 On May 14 the Swedish Chamber of Commerce was very proud to host a Chamber Luncheon with keynote speaker Mr. Jesper Brodin, CEO & President of IKEA Group, in the presence of H.E. Ambassador of Sweden Mr. Per Holmström. We would like to thank Mr. Brodin for his inspiring speech about IKEA and its vision for the future as well as thank Courtyard by Marriot for excellent hosting. Thank you to all guests for participating and making this Luncheon to a successful networking event!

This event was generously sponsored by: 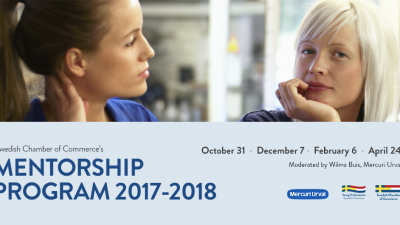 Thank you to everyone who participated in the Mentorship program 2017/2018!

On April 24 was the very successful Final Dinner of the Mentorship Program 2017/2018 at Cafe Selma’s. During this final dinner and evaluation, the mentors and mentees reflected on what they have learned, what changes have taken place and the lessons they learned for the future. We would like to thank our wonderful mentors and mentees for commitment and engagement during this program.

A new Mentorship Program will start in September/October 2018. For more information you are welcome to contact info@swedishchamber.nl 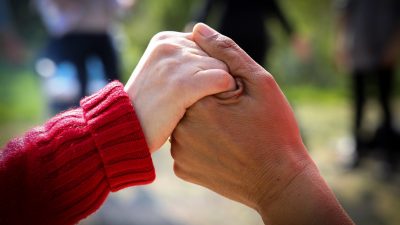 The Swedish Chamber of Commerce exclusive Business Woman Program 2018 presents four seminars for the empowering and support of woman business leaders. The seminars are designed to increase and sharpen your leadership skills and to help yourself to a higher level of efficiency, awareness, and success. Moderator is Malin Hedlund, MH Leadership. We welcome the women from the Swedish Chamber, Young Professionals of the Swedish Chamber with a focus to expand leadership communication and strengthen the skills to communicate with others.

How to read people and gain their trust

How do you become a great leader for yourself and others? What makes others feel confident in you? In this session, we take a closer look at how to use self-insight to create better cooperation with others, and you will learn to read others in your everyday interactions. We address the value of focused communication for creating clarity.

Swedish Fika will be served at all Seminars!

Photos by Nordholm Design and Communication 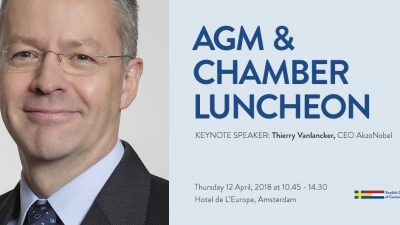 Thank you to everyone who participated at the very successful Annual General Meeting and Chamber Luncheon on Thursday April 12! We would also like to give special thanks to our keynote speaker Mr. Thierry Vanlancker, CEO Akzo Nobel, and Hotel De L’Europe for excellent hosting. 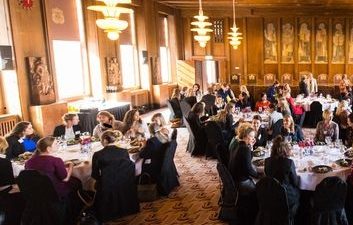 Rina Joosten-Rabou is an entrepreneur, board member and publicist.Prior to co-founding Seedlink, she founded HR consultancy International Top Talent in both China and Europe.
It is an honour to welcome Rina Joosten-Rabou as our guest speaker. We are delighted that she has accepted to share her enriching experiences with us during this 11th edition of the Women’s Day Lunch. We are looking forward to welcoming you on the 8th of March.

Men are more than welcome to join us for this event!